Bathroom fan off based on occupancy and humidity

k1s Member
June 2018 edited June 2018 in Apps
I have a wall switch (outside the bathroom) to send turn on the fan, connected to a Fibaro double-switch 2 relay.  My kids leave it running all the time long after they finished having a shower, and I'd like to tun it off after they left - if the humidity (from the Aeotec multi-sensor) is below 60%.

I can't see a way in normal flows to have 2 triggers (movement alarm off + humidity low), so wondered if the State Control App could be used but I didn't properly understand the the concepts and steps.

JPe and @cbh I'm trying this:

...which I think will turn off the fan 5 minutes after the PIR detects no further movement if the humidity is less than 60% and the fan is turned on, triggered by a change in humidity.  @cbh pointed out that any change in humidity is will trigger the flow regardless of direction of change or magnitude.

Looking that the sensor settings: 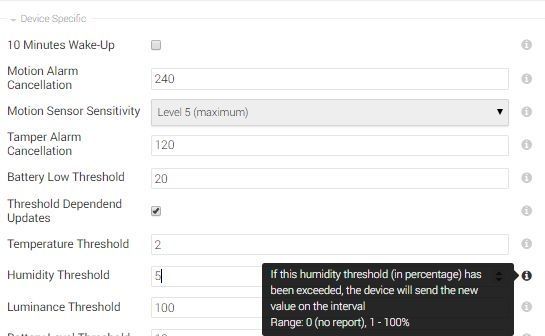 ...it seems we can set the threshold for the change in humidity that causes the sensor to report back to homey.  I don't know if this is the relative humidity measured value or the percentage change in the measured value so I'll try to run some tests.

In the meantime, I still wonder whether using the SergeR 's State Control app might be more efficient, since if I understand correctly, the above flow will be triggered/run very often irrespective of occupancy whereas by setting a States appropriately, flows could be designed that only run when the fan has been switched on and left on after somebody exited the room.